In early 2017, the avatar of the official Google account in Instagram was changed to the letter G.

Google encourages and supports creativity with respect to its brand, so from time to time Instagram exhibits works by talented people who created creative photos with a capital letter G and tagged their #MySuperG hashtag.

It was this that decided to use the agency Mavericks, offering its client Plitos an idea to put the letter G from the cassette and place a photo in Instagram. 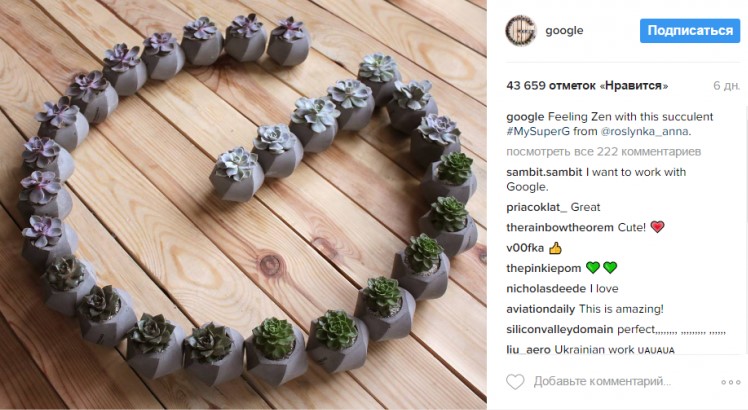 Unusual concrete #businkos are modeled with the help of parametric calculations in the Ukrainian architectural and production company Plitos (included in In.Lab Architects). The company works in the field of “digital architecture”, where programming is closely linked to the formation and depends on mathematical algorithms and formulas. Plants in unusual pots drove Anna Pashchenko, the founder of the brand Roslynka, who has long collaborated with Plitos.
The Ukrainian designers have recognized the originality of their work not only from Google, but also from a number of Ukrainian media who have not been able to pass by such a pleasant event for Ukrainians. It was enough just a few letters, and the first wave picked up AIN with its numerous audience, then Espresso.tv, having published on its sites articles about the success of the local Ukrainian brand.

In general, at the time of writing a post in an official Google account, Instargam collected more than 40,000 likes and 200 comments. Several dozen articles were published in Ukrainian editions and social networking pages.